SUBMIT CONTENT! WRITE FOR US! CLICK HERE TO LEARN MORE
HOME > Lifestyle & Culture
I Imagine A World Without Allies 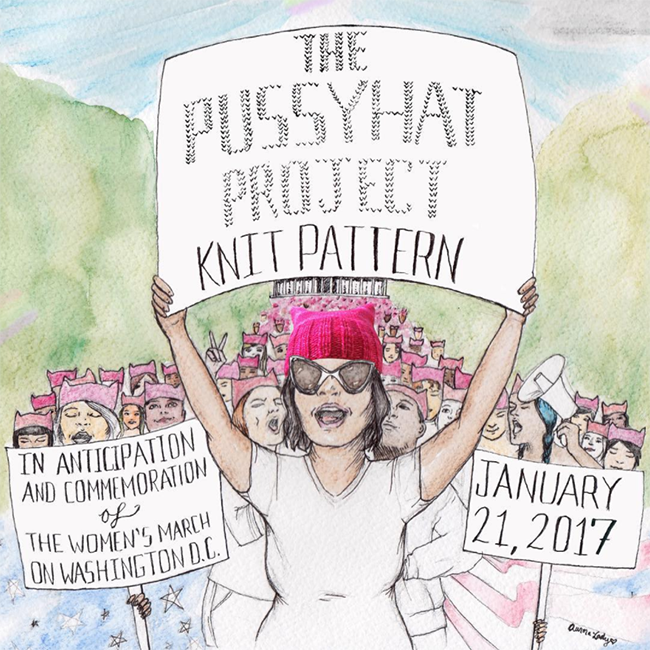 Photo: The Pussy Hat Project via Instagram. Artwork by @auroralady
While many lauded the large demonstrations [at the Women’s March on Washington and the solidarity marches around the world], it was expectedly imperfect. Before and after the protest, prominent Black activists offered their valid critiques. In “Why I’m Skipping The Women’s March on Washington,” Jamilah Lemieux beautifully lays out the failures of white feminism in promoting or achieving solidarity. In “Dear White Women, We Gotta Talk About the March”, Johnetta Elzie lays it out point blank: Where have they been?

I often wonder what allyship would look like without performance. I wonder how I would read Tim Wise without having to read through his ego. I wonder if I am being overly critical as I side eye Matt McGorry when he posts about how Michelle Alexander and her seminal work The New Jim Crow: Mass Incarceration in the Age of Colorblindness changed his life.

To me, it doesn’t seem helpful for a white person to scream about everything they learn about racism and white supremacy in real time and make the moment about themselves.

Even a white ally tasked with educating their own communities, or who seemingly understands that the ideas, concepts, and principles created by people of color will only be listened to by other white people when it comes from them does not give credit to the people of color who performed the intellectual labor necessary to amplify these concepts. This is why I imagine a world where they do not exist at all.

When I say I imagine a world without allies, I mean the ally identity acting as both a point of entry and a demarcated space in anti-oppression movements. While allyship conceptually implies making space and amplifying voices that are typically silenced, this is hardly the case.

“True allyship should require listening, observing, and divesting in the unearned privileges granted through the identity of whiteness.”

Resisting oppression requires a fulsome commitment from a mass number of people to achieve optimal results. In the case of racial justice, a broad goal for Black people is Liberation, and the means to reach it can vary in opinions and methods. The Movement for Black Lives has been compared to the Civil Rights Movement due to its ability to synthesize, spread and successfully mobilize around a message of racial equity.

But the mainstreaming of Black political and social empowerment has brought forth both positive and negative results. While the Movement has been successful in globally informing people of the devastating ways anti-Blackness operates, it has also unintentionally enabled white allies — who are unqualified and lacking in critical skills — the room to take up space. White allies should never feel comfortable in racial justice spaces, and yet a significant number of them do.

Due to the mainstreaming of racial justice activism, serious questions have been raised around whether or not white allies are equipped to stand beside, support or fellowship with a community that has historically been silenced through many forms of white supremacy, including white-centered feminist groups.

“Many white feminists are not doing the necessary work to dismantle whiteness, mirroring the tone-deafness of their famous feminist idols like Lena Dunham.”

Many white feminists are not doing the necessary work to dismantle whiteness, yet appropriate terms like intersectionality, mirroring the tone-deafness of their famous feminist idols like Lena Dunham.

At the Women’s March on Washington and the solidarity marches around the world, over 3 million people mobilized to protest Donald Trump’s policies and rhetoric. They drove home a message of unity, equality and feminism.

While many lauded the large demonstrations, it was expectedly imperfect. Before and after the protest, prominent Black activists offered their valid critiques. In “Why I’m Skipping The Women’s March on Washington,” Jamilah Lemieux beautifully lays out the failures of white feminism in promoting or achieving solidarity. In “Dear White Women, We Gotta Talk About the March”, Johnetta Elzie lays it out point blank: Where have they been?

The salient point that both Lemieux and Elzie are raising is the same message of intersectionality that informed the beginnings of third wave feminism. None of this is new or unverified, yet white feminists and others uncritically called these valid concerns divisive.

To me, removing white people and the white gaze is central. I firmly reject the notion of carving out a space for people who decide when to see our humanity. I do not believe in allowing people to point to their Black friend when confronted with accusations of racism and bias. I reject the notion that exclusion and divisiveness in relation to blackness is negative. I am interested in imagining a world where we do not apologize for wanting a livelihood without oppressors. I have no time to explain how I do not mean that white people cannot be friends or have relationships with Black people- they clearly can. We are past these un nuanced ways of breaking things down. I am interested in to what end these relationships are oppressive to blackness. On this point, it is no longer acceptable to insert interracial relationships in a race analysis if the conclusion is that sex solves oppression. Our oppressors have always sexualized us- interracial relationships are innocuous to Black liberation and ironically demonstrate the uselessness of allyship. If people marrying black people and raising black children have not achieved our freedom at this point, they never will.

“Interracial relationships are innocuous to Black liberation and ironically demonstrate the uselessness of allyship.”

We have too much evidence that we should only rely on ourselves. That is not to say white people do not have work to do in dismantling and relinquishing whiteness as an identity. However, I am arguing that by claiming allyship, with built in low standards, it reinforces a part time version of liberation for us, with permission from them. Allyship is flawed on it’s face, but one of the biggest flaws is the heavy onus on racialized people to educate, forgive and forget the damage that whiteness continues to reap. Without centering whiteness and promoting allyship, we flourish. Without allyship, we could save the time we have committed to have frustrating and dehumanizing conversations with a host of people, we would not be labelled as angry or radical when we insist on an equity lens that centers blackness. Without allyship, we would not have white people telling us they agree with our freedom in theory, but laughably and ahistorically tell us we have to be civil, and ask nicely. Allyship and respectability politics go hand in hand-it is the respectable liberal or conservative Black person who grants allies the access to speak on blackness.

“Allyship and respectability politics go hand in hand-it is the respectable liberal or conservative Black person who grants allies the access to speak on blackness.”

Black people are busy and cannot lend additional labor to an issue we continuously exhaustively lay out. We cannot analyze and consult all the ways in which white people need to deconstruct decolonize their identity and the damage that identity continues to reap. We cannot do it because we should not have to, and we would not be listened to anyway. The concept of allyship mistakenly tells people that they are invited to be centered. The truth behind allyship in any movement is that while resistance requires everyone, the roles are not created equally. True allyship should require listening, observing, and divesting in the unearned privileges granted through the identity of whiteness. Whether or not that is a possibility is not our concern.

Melayna Williams holds a JD, is pursuing her Masters of Laws in Anti Discrimination law and is the Chair of the Rights Advocacy Coalition for Equality (R.A.C.E.). She is interested in the ways in which racial justice work is being done globally, specifically outside academic circles and within communities.

Hair Care
Understanding Natural Hair Texture: The...
Understanding the difference between coarse and kinky hair is important, but it may surp...

Makeup
The Beauty Of Orange Shadow
Orange hues look amazing on a canvas of brown skin. Rich colors that span the range of ...

Read This 👓
Why This Instagram’s Feed Of Food...

Hair Care
This Easy Styling Trick Will Change How...
So you've got what, like a gazillion bottles of “frizz serums” laying around and you...